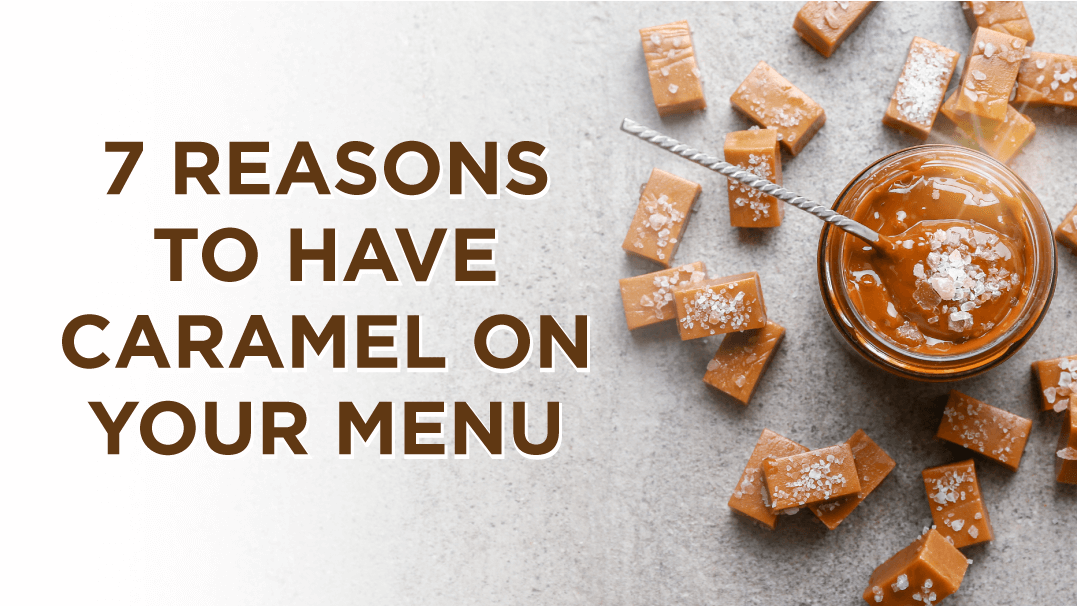 7 Reasons You Should Have Caramel on Your Menu

As if the month of October needed to be made better, but hold on to your seats because we’re about to prove that wrong, it’s National Caramel Month! Caramel, a rich, sweet treat that has multiple pronunciations. You know the age-old debate of caramel vs caramel. The flavor that is celebrated year-round and is acceptable to be combined with any other flavor. Some people even indulge in caramel Cheetos!

Did you know that salted caramel is considered one of the most crave-able foods? In addition to sugar and salt being two of the most addictive substances, sugar can release serotonin, also known as the “happy” hormone.

While the history of caramel isn’t exact, many believe that Arabs invented caramel around 1000 A.D. It is recorded in the late 1800s that someone added fat and milk to the recipe, which is what we know today as the delectable chewy treat. Another fun fact, sugar beet juice was often used during that time since refined sugar was expensive and difficult to find.

One of the most known caramel recipes is the caramel apple, which interestingly enough was an accident invention. Dan Walker from Kraft Foods in the 1950s dipped some apples in caramel he had melted down. Putting a new take on the candied apple, it became such a hit that it is still a staple nowadays, especially during Fall and Halloween.

With all of that aside, here are seven reasons why you need to add caramel to your menu today!

1. Combinable with Any Other Flavor
Can you think of any sweet treat flavors that don't go with caramel? Yeah, we didn't think so. From pie and fruit to coffee and milkshakes. Not to mention, how it pairs perfectly with salty items like saltines and potato chips. Caramel is the ultimate partner. If you’re looking for obscure food combinations it typically includes either Nutella or caramel. For example, soy sauce caramel. This is done by taking a traditional caramel recipe and adding soy sauce to it. It is used to top ice cream and other desserts to provide a little bit of a twist.

2. Appeals to Everyone
Caramel is a big crowd-pleaser that everyone is familiar with. You can ask anyone from any generation, and they can tell you what caramel is. Why do you think most candy bars contain caramel? It appeals to the mass population. For example, the Payday candy bar is only caramel and peanuts, which has been around since 1932. For crying out loud, there’s even a restaurant/lounge called Caramel! That’s how popular it is.

3. Consumed Year-round
As stated above, caramel is a flavor that can be consumed all year. Unlike pumpkin spice or watermelon, caramel is not defined by one season even if many tie it to more fall flavors. You see many people go through Starbucks or Dunkin Donuts throughout the year and order something along the lines of a caramel frappe or caramel macchiato.

4. Gives a Premium Feeling
Many of us grew up seeing Werther’s Original advertisements with the confectioner, or candy seller, and the kid watching through the window in awe among many other commercials. Thinking about this immediately gives us that feeling of prestige and nostalgia when we think about caramel. It gives us the feeling of high-class delight in every bite. Caramel is a candy that represents the American dream, the Great Gatsby of sweets.

5. Can Create an Aesthetically Pleasing Concoction
Whether from drizzle for a frappe to coating popcorn, the caramel colour is very distinguishable, and it can make any recipe look chic and expensive. Many recipes call for brown sugar, making the color easily obtainable. Otherwise, it is achieved from the way you brown the butter with the sugar. Why not take it a step further and make decorations out of caramel? Decorate your desserts with crystallized caramel.

6. Quick and Easy to Make
There are several different options for a caramel candy recipe. One common at-home method is boiling a can of condensed milk. However, a caramel recipe can be simplified even more by making it in the microwave with just a couple of ingredients. The more traditional method calls for butter, milk, and sugar. You can also substitute some ingredients to make it dairy-free to appeal to a larger audience. For a toffee or brittle, all you have to do is cook the caramel for longer. Ultimately, toffee is just a darker caramel.

7. Easily Obtainable
Want to know something better than caramel being easy to make? You can buy caramel sauce and syrup already made! It comes in a squeeze bottle, a jar, and whatever your heart desires from wherever you choose to go!
It’s time to send your recipes to new heights whether it be from dessert nachos to cupcakes, so on and so forth.