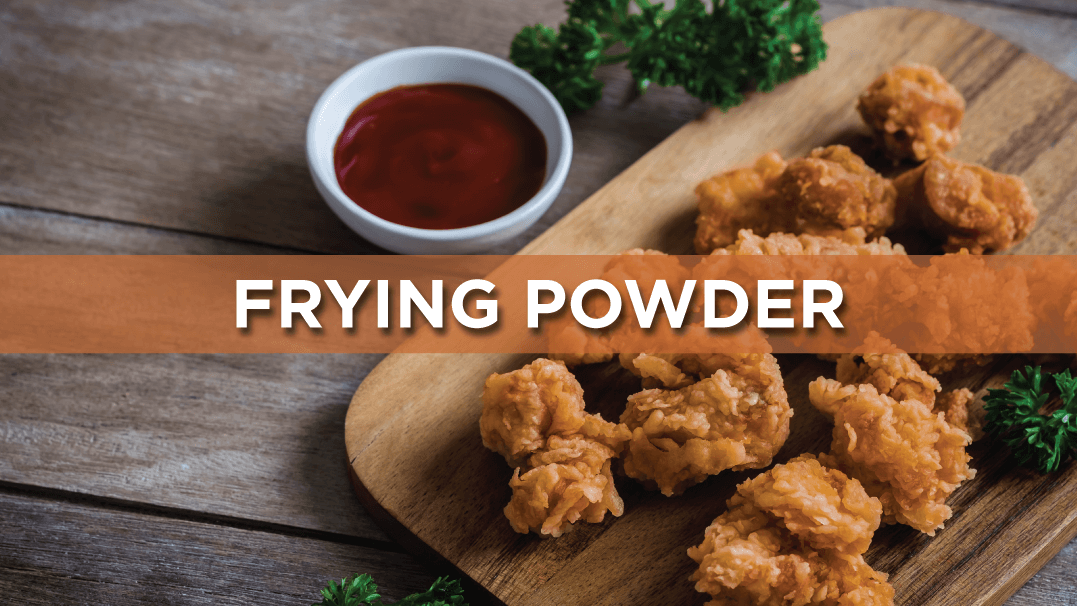 Frying Powder: The Most Important Ingredient

A Toss in Frying Powder

As frying has become one of the most mainstream cooking options, fried chicken and catfish have been considered Southern United States delicacies for decades. Taiwanese popcorn chicken for even longer than that amongst other foods from around the world! The most important aspect that goes into making the best of these recipes is the batter or powder mixture. This is what can make or break your meal, or snacks.

Fried food is thought to be dated all the way back to Ancient Egypt with their pastry dough, but it did not become as common until the elite class started frying meats and other foods in the Middle Ages. However, it was not appreciated like it is today. People during that time did not like how it made food crunchy, whereas, most today prefer to order extra crispy chicken, like Kentucky fried chicken.

Apart from the rides, the food is the top reason the mass population goes to fairs. To feast on fresh corndogs, funnel cakes, fried Oreos, etc. Fried foods aren’t popular in just the United States, but all over the world. Italy has Neapolitan fried pizza, the UK has fried fish and chips, there is Korean fried chicken, Taiwanese fried chicken, etc. The traditional fried chicken that we have all come to know and love is rumored to have originally derived from Scotland. Fried chicken has become such a staple in people's diets that it even has its own holiday, July 6. Many Americans have also started deep-frying their turkey for Thanksgiving.

Key to the Best Frying Technique

There are typically different mixtures depending on what is being coated to fry. All-purpose flour is the most common ingredient for frying. Lollicup restaurants serve Taiwanese popcorn chicken in which they use Tea Zone Seasoned Frying Powder or Tea Zone Frying Batter Mix, Extra Crispy, both of which contain flour and other various ingredients such as Tea Zone seasoning powders to get the best possible recipe.

For catfish fry batter, cornmeal is the most common choice. Other typical breading's are bread crumbs, rice flour, and corn flakes. A traditional suggestion is to use buttermilk for marinating ahead of time as it helps add flavor and maintain juiciness. Also, baking powder aids in making a crispier product because it creates tiny air holes when placed in the hot oil allowing it to get deeper than just surface level. Adding different spices, such as chili powder is another great way to help add some extra flavor.

There are also wet batters to consider, meaning a more liquid substance to dip the food in. It could be compared to pancake mix, which is a great option to use as a batter. This could include wet batters used for corn dogs, other types of fish, onion rings, etc. Also, beer batter is a very common type for cod, sometimes chicken, and onion rings. This method consists of adding some beer to the beaten egg to add a little extra pizzazz.

There are numerous ways and methods to fry. Among these, 3 types of frying include deep-frying, air frying, and pan-frying. The most well-known of these methods is deep frying. This is the one used by fast-food restaurants, theme parks, and fairs as it is the quickest most efficient for larger batches. Deep frying can withhold both wet and dry batters. You can even add uncoated foods including french fries.

The air fryer was introduced in 2010 and is currently more popular than any other method. It’s a quicker and easier way that is also said to be healthier since it is not immersed in oil but cooked by the circulation of hot air. Air fryer fried chicken is a less messy way to get crispy chicken. It is more liable for dry mixtures and noncoated foods.

Lastly, pan-frying is another typical at-home method. This is done in a pan, ideally in a cast-iron skillet or some sort of other heavy skillets, by heating oil or some other fat and frying one side at a time. Careful not to crowd the pan though as this can result in the oil temperature dropping allowing the food to absorb more oil than it should which makes your frying powder mixture soggy, and it causes irregular cooking. It can often be considered the same as sauté, but sautéing consists of "tossing in a pan" whereas pan-frying is done by flipping only once or twice. Stir-frying could likely be considered a form of sauteing most often done in a wok. If it makes you feel at ease in not overcooking the food, a thermometer is a great tool to use. These methods also work for vegetables and tofu if those are your preferences.

*Side note: be careful and wary of a grease fire. Water will not put it out. If a situation occurs, cover it with a lid or cookie sheet, or pour baking soda over it.